Yesterday I tweeted out some thoughts about Microsoft’s intentions with Windows 8. Those tweets were based on Tom Warren’s post about Microsoft renaming Windows Explorer. The Metro interface in Windows 8 has seen strong reactions—it just isn’t for mouse interaction. The new Metro screen is the new Start Menu. And that wasn’t the only major decision. Microsoft also removed the Start button.

The Start Button and Start Menu have been part of Windows since the revolution in GUI computing—Windows 95. Windows 95 also introduced Windows Explorer. In Windows 8 things are changing. Microsoft is changing. It all started with the Metro Start Menu: 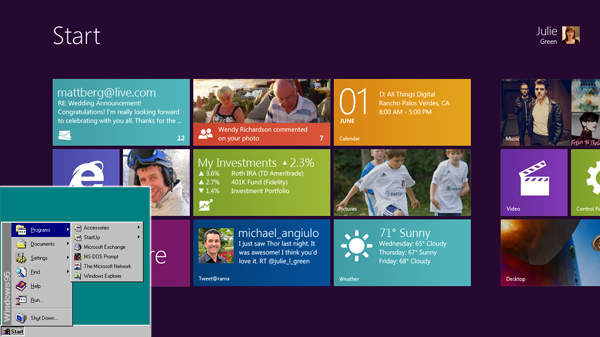 The one menu where we could access everything in Windows—from Programs installed to locations. All of that now happens through the tablet-focused, Metro-inspired Start Screen. It’s not a menu anymore. It’s a real-time constantly updating app-launching screen.

I believe this is a fundamental change in computing. “Launching apps” is a concept that’s become part of our computing due to the iPhone—a mobile phone. Windows Phone 7’s start screen launches apps, it doesn’t start programs. The Start Menu has been replaced, it hasn’t evolved, the old one has been removed to bring in something that’s fundamentally different.

What came next was the removal of the Start button—the iconic colored Windows flag that has been on every Windows desktop since Windows 95. It was branding at its best; the logo was where we started programs, we accessed components of Windows, and we even shut down Windows. In Vista, Microsoft dropped the word “Start” but kept the iconic logo.

With Windows 8, everything has changed—Windows has a new flag and it has been removed from the desktop. Let’s take a second to understand this, a company just removed their product’s logo off the screen that a user saw everyday—a marketing/branding nightmare. After 15 years of seeing a logo that has become synonymous with the product, it has been changed and won’t be seen by the users everyday when they start the computer anymore.

Not only has Microsoft changed the logo, they’ve also removed it.

Then came what has given Microsoft skeptics another reason to be skeptical of the company. The company changed its business model. For years, Microsoft sold Windows licenses. And now they’re doing Windows hardware as well—Microsoft Surface. I don’t believe the company has any intentions of defeating HP or Dell. I don’t believe the company has set sales target for Surface (despite what “common-sense” would lead people to believe). There will be production targets, not sales targets—the two are very different.

However, the move is a drastic change for Microsoft. Not only will Microsoft sell Windows, they will also sell Windows hardware. Cnet writer Marty Wolf compares this development to IBM’s move to give up their desktop business and become something more. IBM flourished. It was a huge shift in tide for IBM and Windows 8 is for Microsoft.

The latest development—the renaming of Windows Explorer—is another milestone in this shift in tide for Microsoft. Windows Explorer was the core, user-facing application; it had the product’s name in it. Now it is known as File Explorer. You no longer explore Windows, you now explore files.

File Explorers on mobile phones give you access to the insides of a phone. The underlying components that as a user you don’t necessarily need to bother yourself with everyday. Now, it’s in Windows. We’ve gone from starting programs to launching apps and from exploring Windows to exploring files. Hello, mobile computing.

To many it seems just a name change, something that makes sense. I believe it is more. Windows 8 is changing Microsoft as much as Microsoft wants to change computing. Windows 8 is a transition OS—something I’ve been saying for a while—and all these changes are pointing to a more touch centric interface from our more confortable pointer/mouse interface.