At the Worldwide Developer Conference 2011, COO Kevin Turner or as Mary Jo calls him Chief Compete Officer, showed two slides comparing the consumer strategies of Microsoft and Apple. According to Turner the difference is in the ecosystems. Apple’s two OS strategy iOS and Mac OS X is fundamentally different from Microsoft’s Windows everywhere plans. Microsoft’s ecosystem: 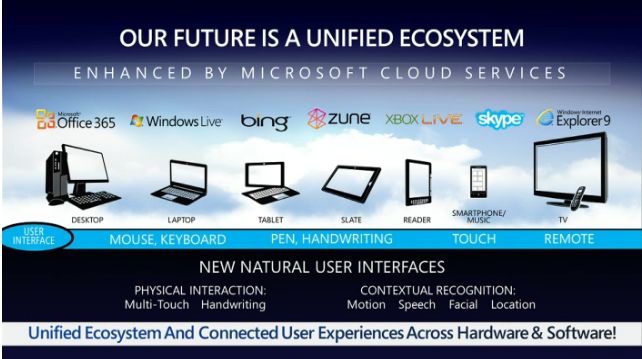 Turner foresees ability to write the app once and be able to have it working across all screens, unlike Apple. The slides show how Microsoft’s unified ecosystem brings all services across all devices whereas in Apple’s ecosystem, content can be distributed via iCloud and iTunes but applications written for iOS have to be re-done for OS X. With the same Metro interface now across the 3 screens, a designer can create interfaces that work on all screens. 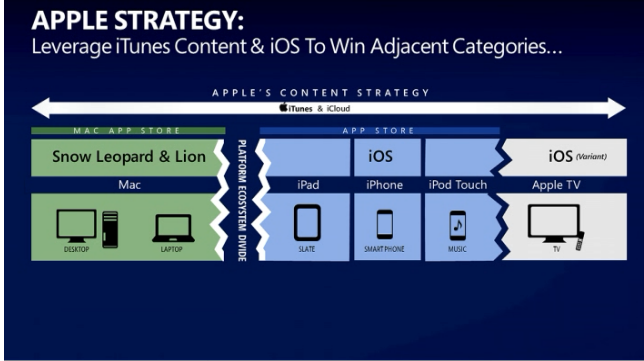 Yesterday’s comments by Andy Lee about Windows on tablets have made headlines and unfortunately I have not read any compelling arguments on why there shouldn’t be Windows on a tablet when Microsoft has clearly demonstrated that with Windows 8 one can pull off a touch friendly phone OS on a tablet while maintaining full fidelity. I have written on length about Windows on tablets and why it makes sense for both Microsoft and the user. The pundits are stuck on the post-PC discussion whereas IDC has shown a fall in iPad (tablet) sales, I don’t believe we’re in the post-PC era because there simply isn’t a post-PC device. All we have are elongated mobile phones which are essentially smaller PCs. A post-desktop era came in a while back, people prefer powerful laptops to desktops but despite the phenomenal iPad success, Apple is still making Macbooks, for all the post-PC talk they haven’t stopped manufacturing Macs or Macbooks.

Kevin Turner also talked about a topic I wrote about – Consumerization in IT. Microsoft’s strategy has 4 pillars: 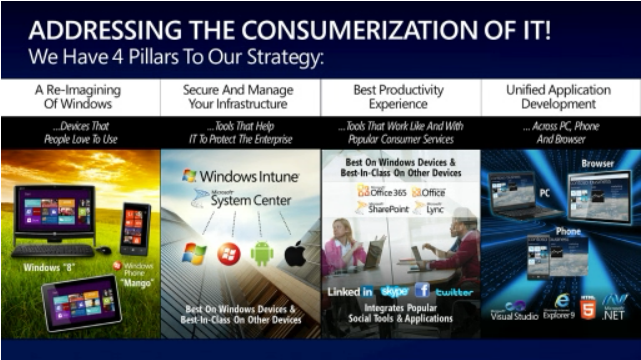