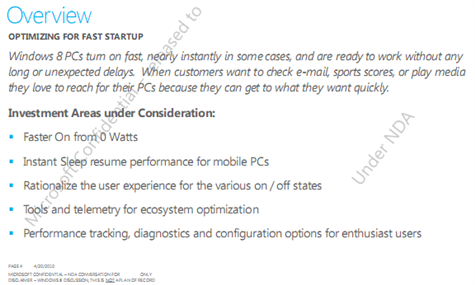 With Microsoft’s commitment to ARM they finally started talking about Windows 8. A while back there was a huge dump of slides that leaked regarding Windows 8. One of the features listed in the slides was “Instant On”, detailed as fast booting for specific applications such as watching media or sending emails. Two months later, I found a patent titled Windows Direct Experience explaining part of this particular slide.

According to the previous patent the OS would go into a sandboxed mode to launch Media Center and bypassing most of the other applications being loaded on startup. I’ve now found another patent application that gives us a little more insight on how Microsoft plans to do this.

The so called sandboxed mode would essentially be virtual machine instances. Microsoft will divide the OS functions in two categories:

General Purpose OS would be what we have Windows today, it boots, you login, have a cup of coffee while it prepares itself to be usable. The Appliance-like OS would be the Direct Experience for specific purposes like media consumption. Microsoft’s Hypervisor technology will play a crucial role in this implementation: 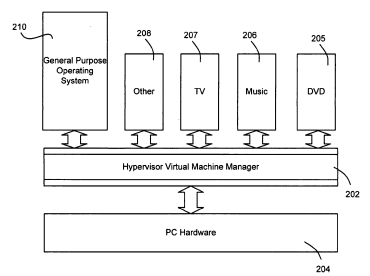 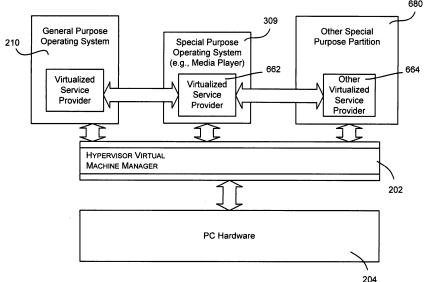 The patent continues with the media playback scenario and suggests that a specific button on a remote can be dedicated to trigger whether the system should boot into an experience specific virtual instance. The patent further explains that the system can be set to boot only into the appliance environment. Which I’d assume would be something like registry tweaks and group policies.

With Windows 8 now on SoC, I see television sets installed with Windows configured to boot into media center to play your music, DVDs or movies. Google TV competitor and Windows everywhere? It’s on. Congratulations on your 11 years as CEO, Steve B. This also fits well with the rumors about more than one UI with Windows 8. It complements my theory of having distinction between general purpose OS and more mobile/media focused OS, tying it all together quite well.

The patent further explains how drivers for specific devices will be shared by the General Purpose and Specific Purpose OS instances.

Update: Mary Jo pointed out that Hypervisor would be a part of Windows 8 a while back.