I’m no more excited about Windows Phone 7. I WANT THIS PHONE DAMMIT! 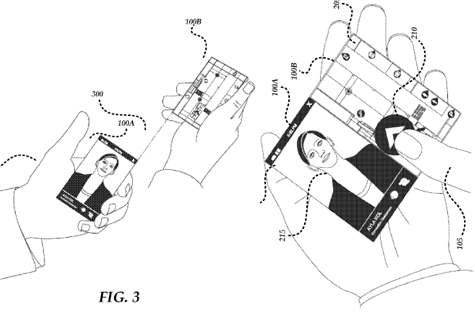 We’ve all seen the Office Labs Vision 2019 video and its parody. One of the cool devices shown in the video is the mobile phone with two surfaces that can be kept one over the other or joined together as a dual screen or used individually with one as a phone and the other screen allowing you to access the other features of the phone simultaneously. The other feature of the video shown was projections and augmented reality combined, this was demonstrated by Office Labs GM.

Well, Microsoft has applied to patent this phone. A short description of the device according to Microsoft engineers:

The three technologies crucial to this type of cell phone according to the patent application are:

These three properties will determine the software behavior and co-ordinate the options shown when the two modules of the phone are in certain distance of each other or what the orientation of one is with respect to the other. Here’s a flow chart of how the system works: