The only two Apple software for Windows have been the first to embrace the new features offered by Windows 7 in its Superbar. Safari 4 shows tabs as separate Superbar thumbnails that can be previewed & closed like Internet Explorer 8 & with iTunes 9, Apple has brought in quick-play controls to the Superbar preview like Windows Media Player 12 and also has Jumplists. Screenshots: 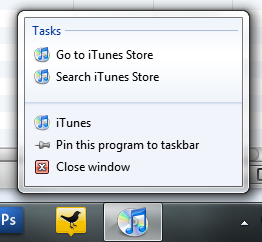 It is interesting that neither Mozilla nor Opera who have released major versions have adopted Superbar’s capabilities. Chrome 3 final build supporst JumpLists. And honestly, beside iTunes & WMP, I don’t use any other media player (VLC is a just-in-case.)